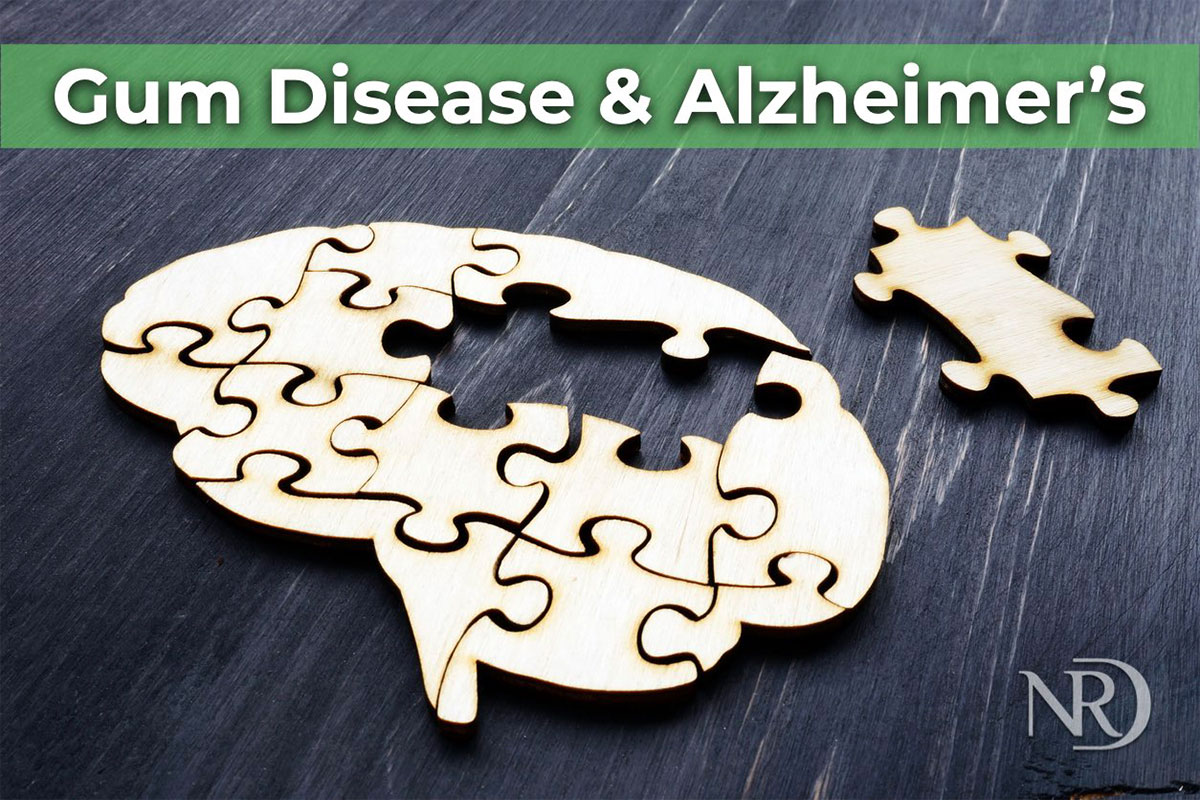 According to recent research by New York University’s College of Dentistry and Weill Cornell Medicine, gum disease could lead to an increase in the likelihood of developing Alzheimer’s disease.1

While doctors are still learning more about Alzheimer’s and its causes every day, they have identified two key warning signs that show the disease could be developing in a patient. The first is when microscopic compounds called amyloid-beta proteins start clumping together to form a kind of plaque in the spinal fluid. These clumps can start to interfere with the billions of messages2 your brain is sending every second.

The second issue occurs when a second compound called tau proteins starts to build up in the brain’s neurons and form tangles. Again, this interferes with the brain’s ability to communicate. Each of these problems leads to brain cell death and, ultimately, a loss of cognitive ability.

How is gum disease a factor?

Gum disease is caused by an imbalance of oral bacteria. Your mouth is home to both “good” bacteria that protect your mouth and keep it healthy, as well as “bad” bacteria that cause inflammation. When the gums become infected, it can cause pockets of bone loss to form between the gums and teeth, which then can become infected with even more bacteria. Gum disease has already been linked to a number of other serious health concerns; including cardiovascular disease, heart attack, stroke, diabetes, and even cancer.

Researchers from NYU and Weill Cornell say the evidence is growing that an imbalance of oral bacteria and resulting inflammation correlates with an increase in those two biomarkers mentioned above. They conducted a study in which 48 healthy seniors with no signs of dementia gave an oral swab and a CSF (spinal fluid) sample to be studied.

The test revealed that patients with more harmful bacteria are more likely to have reduced levels of CSF amyloid-beta; a warning sign that the Alzheimer’s-related protein is gathering in the brain.

Periodontal disease (or gum disease) is a completely preventable condition. And preventing it is as easy as brushing twice a day and flossing. These two hygiene routines are extremely effective at ridding your mouth of debris and the bad bacteria that cause gum inflammation.

Don’t like flossing? Try a Waterpik instead — studies show it’s actually more successful at removing the bacteria containing plaque in between your teeth. For added protection, a good mouth rinse can help clean some of the more difficult-to-reach spots in your mouth. We really like the Brushing Rinse products which are organic and use peroxide and essential oils to combat those bad bacteria. The use of an oral probiotic is something that is also showing promising results in helping balance the oral bacteria.

It is equally as important to have regular preventive care visits with your dentist. Dental hygienists are trained experts with specialized ultrasonic instruments that are much more effective at removing tartar buildup and those bad bacteria from your teeth and gums than you can accomplish alone. Other steps you can take to improve your gum health are to avoid smoking, get plenty of vitamins A & C, and have your dentist correct any issues such as faulty fillings or crowded teeth.

We are equipped to handle the majority of your dental needs.

We understand the importance of having a dentist you can trust. And that means not being sent off to a different specialist every time you need a new procedure. At Nashville Restorative Dentistry, we are equipped to handle the majority of your dental needs, from cosmetic to restorative, implants to extractions. When you come to us, you are getting a dental team for life.

Back to Blog Page